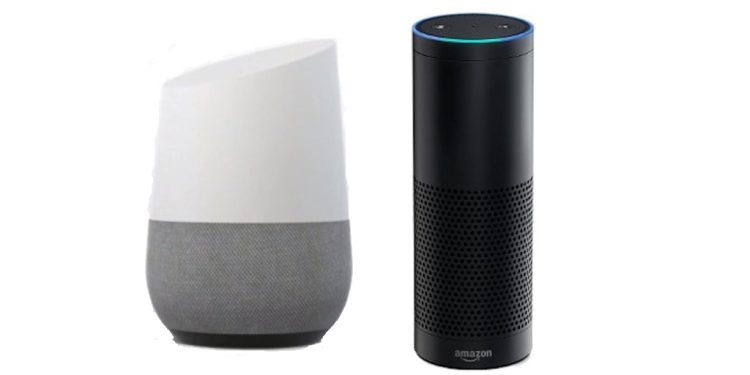 Smart homes and home automation are becoming more commonplace. Google have released Google Home, Amazon Echo has been around for a while, and soon Apple will launch HomePod*.
Let me be clear, these devices are all amazing. However, there are some considerations that may not be immediately obvious to people in Ireland. (*HomePod is now available in the UK)

Technically, none of these devices are on sale in the Republic of Ireland*** (no longer true for Echo!)

Store.google.com doesn’t even display the Google Home when Ireland is the selected country.

Apple have said that the HomePod will ship in the US, UK and Australia in December 2017… i.e. Not Ireland.

Of course, there are ways of buying all of these devices (using Parcel Motel etc).

It remains to be seen how it will be possible to get the Apple HomePod. It is likely that the configuration app will again only be available with a UK, US or Australian iTunes account.

Update 5th December 2017:  It would appear that anywhere that has sold the Google Home or Google Home Mini has sold out many times in the last month.  Littlewoods.ie did have the Google Home Mini, but it now seems to have disappeared. Argos.ie does not have them as I write this, and Argos.co.uk also appears to have sold out in all of their Northern Ireland stores (previously you could get them in Newry). However, just this afternoon, it would appear that Maplin.ie has new stock (follow this link).

***Update 8th December 2017: Huge news today from Amazon.  Amazon Echo and the Alexa App are now available to ship direct to Ireland from Amazon.co.uk and the Alexa App can be downloaded directly from the Irish App Store. This essentially makes the Echo fully functional in Ireland (as long as you’ve got decent broadband and WiFi).

***Update 12th February 2018: Currys PC World Ireland now sell all the Amazon Echo range in store and online. What’s more, a number of Ireland specific services now work directly with the Echo range.  Its also worth noting that Amazon have opened up access to Alexa, so now many manufacturers are building Alexa into their devices. The Sonos One is an obvious example.

***Update 12th February 2018: Apple HomePod is now shipping in the UK. Presumably it can be passed on to Ireland via Parcel Motel etc, but beware… you may need a UK or US Apple Account in order to use it.  With the initial reviews in, it would appear that the consensus is that the HomePod has amazing sound quality, but Apple’s walled garden and Siri significantly limit the HomePod.  It can’t even use Spotify at the moment, so you are restricted to using Apple Music. Only think about this £319 device if you are a truly dedicated Apple fan and an audiophile at the moment.  It is further restricted by the accompanying device requirement: “Requires iPhone 5s or later, iPad Pro, iPad (5th generation), iPad Air or later, iPad mini 2 or later, or iPod touch (6th generation) running iOS 11.2.5 or later.”

So, let’s say you’ve seen the really cool technology and you really want to have a device that can turn on your lights with a simple “OK Google”, “Hey Siri” or “Alexa” command (…and yes Amazon allow you Star Trek fans to change the Echo trigger word to “Computer”).  This is where you need to think a little ahead.

Certainly, part of the decision-making process will come down to which system you’re already most invested in.  For example, if you already have a house full of Apple devices (Apple TV, iPhones, iPad’s etc), you may want to wait for HomePod.  If you are very Google / Android based (Samsung, and most other phones, tablets, Chromecast, Gmail, Google Photos etc), you may want to go for Google Home. If you are fond of Amazon already (Amazon Prime, Kindle, etc), it may lean you towards Amazon Echo.

I’ll restate that they are all going to be incredible pieces of technology and I have no doubt that you’ll love whichever you pick.  If you can get the associated apps for your phone or tablet, they will work cross platform (e.g an iPhone can control the Amazon Echo) (**You need a recent Apple device to use a HomePod).  However, you need to consider one very important factor when buying a device for Ireland… the Search Engine.

How does the Search Engine work?

Amazon and Apple both have arrangements with Microsoft to use Bing as the default search engine on their devices.  Google, of course, use Google.  ***Update 25 September 2017: Apple announces that it is switching from Bing to Google for Siri and Spotlight Search… Great news for Siri and future HomePod users in Ireland!***

Microsoft themselves have their own voice controller, “Cortana”, and you may be familiar with it if you have an Xbox One or Windows 10.  However, even Microsoft won’t turn it on by default in Ireland (you have to use UK settings).  Now you could argue that it might be because of accents, but there may be a more fundamental reason. Microsoft’s search engine, Bing, is not particularly friendly in Ireland.  One of the reasons for this is that Bing does not allow business users to set up their business on “Bing Places for Business”.  This means, from a search perspective, it is harder to find local businesses in the country. So, you can’t just ask Bing where a particular business is located or when it is open, and expect a concise response.

So, what about Google.  Well, this is where Google Home might shine brighter than the others.  Google does offer “Google My Business” in Ireland, and you will have seen it if you ever search for a shop:

So, if I can ask Google’s search engine to find a business, then Google Home should find it using my voice too.

All of this can be checked using Cortana (on Windows 10 or Xbox One), Alexa (via a web based Echo mock-up) , Siri (on a recent iPhone, iPad or Mac) and Google Assistant (voice search on a phone or smart watch), before buying the smart home speakers.

So, all of them will undoubtedly wow you. They will allow you to control your Philips Hue lights and play your music.  Just beware that as soon as they have to search for something, it’s a Bing vs Google competition. In the Republic of Ireland, Google is head and shoulders better than Bing!

Update 12th February 2018: I’ve been using the Google Home Mini in Ireland as part of my home for about 4 months now. While it doesn’t have any Ireland specific skills (like news in the morning from RTE), it can play any radio station via TuneIn Radio.  I can say hand on heart that as a Google user, it is a fantastic device! I confess that I have been surprised how quickly the whole family has gotten used to talking to a device in our home.  It is in very frequent use!  I hope that Google gets its act together soon and makes the path to purchasing one easier soon.  In the mean time, Amazon have got the market all to themselves with the Echo range.

If you do choose to go ahead and start building your smart home with Google Home, Amazon Echo, or Apple HomePod, don’t struggle to set them up yourself.  Contact DeGeekIT to help you get them configured!

Find out more about…